The IV Edition of IbizaCineFest is here!

As we have at the start of every year since this the inception of IbizaCineFest, we await with excitement the arrival of this art film festival and the various screenings and activities related to the audio-visual world that will take place on our island from January 31st  to February 9th.

We wish to bring to you closer to this master exhibition of film, which will run for 10 days and, once more, will fill Ibiza with culture, art, knowledge and passion for those of us who love film. Furthermore, all screenings will be free, which is fantastic news for anyone who wants to come along and be nourished by good quality independent cinema.

Here is the full program for the Festival, so that you don’t miss a thing: 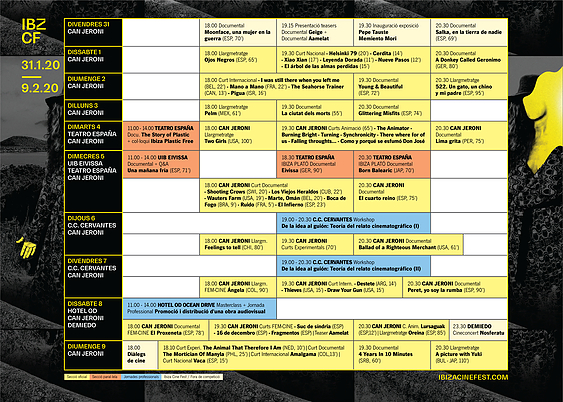 IbizaCineFest is becoming an increasingly international event: to date, films from 75 countries have featured at the event and applications to screen more than 1,400 films have been received. Most of these applications have come from Spain and the USA, followed by Germany, England, France, Italy, Canada and Switzerland. It has become an international showcase that attracts an increasing number of professionals in the sector to Ibiza.

The Festival will open with a repeat screening of “MOONFACE: A WOMAN IN THE WAR”, which was a major success at last year’s edition of the event. Two previews of films currently in progress will also be screened at IbizaCineFest.

Eighty feature and short films will be screened at the Festival, with the feature films to include two world premieres, 3 European premieres and 7 Spanish premieres and films honoured at the Málaga or San Sebastián film festivals, as well as four short films that were nominated at the recent GOYA 2020 awards and a winner at Cannes 2019.

A new category, FEM-CINE, has been added to the usual official categories. As stated previously, the aim of this new category is to promote gender equality both in long and short formats, which is without doubt another step forward in the struggle for equal recognition.

We also wish to highlight the online programme for the Festival with comments on the early days of David Lynch and the commemoration of the great film MORE, which is 50 years old and about which we have written in our articles.

Continuing with the activities that will soon be provided by IbizaCineFest, there will be a screenplay writing workshop, concerts and a multitude of activities for professionals, as well as a master class with international film-makers.

The panel for the official categories is made up of renowned professionals in the audio-visual sector such as Àngela Bosch, Rosa Delgado, Juanjo Ribas, Àngel Roldán, Pascual Fernández, Marta Grimalt, Juan Marí Susierra, Josep Sendra and Carles Fabregat.

We also wish to remind you that, as is the case every year, a prize (“Premio del Público“) will be awarded to the film that receives the most votes from the general public. You can vote for your favourite films on the official IbizaCineFest website (www.ibizacinefest.com), where you can also find out everything you want to know about this  art film festival.

We hope you enjoy IbizaCineFest, and that you do not miss anything that has been prepared for this edition of the event.

Previous Post
Ibicine Gala 2019: A Very Feminist Edition
Next Post
For the films, a green and sustainable island, and the IbizaCineFest additional sections