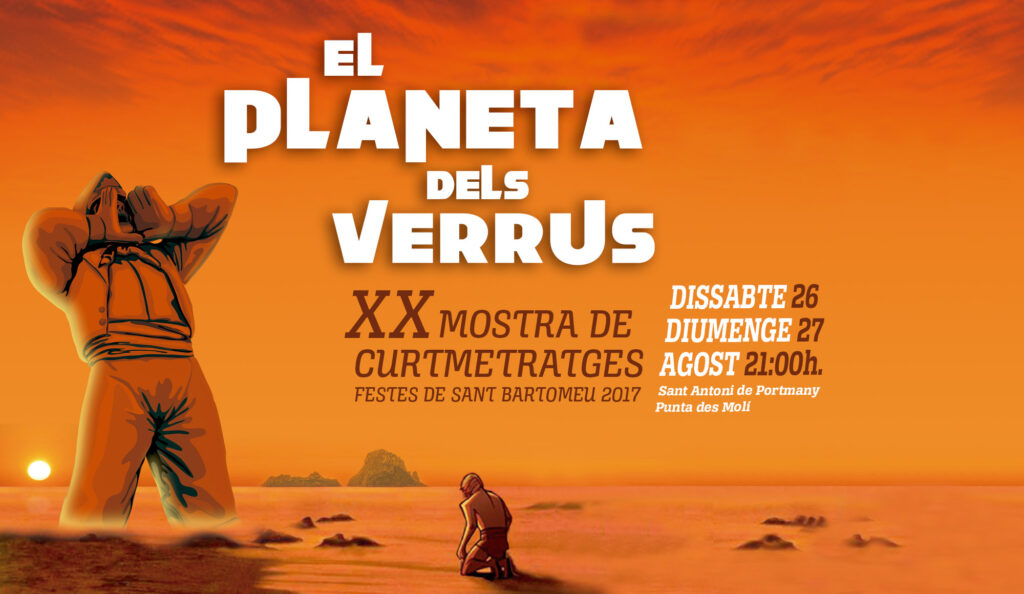 The 20th edition of the short film festival Incortum was held on the charming island of Ibiza during the past 26th and 27th of August.C The festival coincided with the local festivities of Sant Bartomeu in Sa Punta des Molí, Sant Antoni de Portmany. Two days filled with a brilliant repertoire of short films exhibiting a wide range of topics, the majority of them produced on the same island along with many other shorts coming in from different parts of the globe.
The following films were screened on Saturday the 26th: La Otra, by Daniel León Lacave; No es fácil ser Gorka Otxoa featuring the very Gorka Otxoa himself and directed by Teresa Bellón and César F. Calvillo; Ya no te quiero, from the hand of Franciso Hervada Martín; Cenizo, by Jon Mikel Caballero Lorea; Pinocho by Julián Génisson; Verde Pistacho, by Paco Cavero; Érase una vez en Ibiza, by Enrique Garcerán, A#…! (el musical) a musical by Fernando Cermeño (Venezuela) y Monitor Against Mexicans Over Nationwide – M.A.M.O.N from Alejandro Damiani (Mexico and Uruguay).

The schedule of the second day took off with Downunder by Fernando González Gómez; 17 años juntos, by Javier Fesser; Le chat doré by Nata Moreno; Entre líneas, by José Luis Velázquez Menéndez; A prueba, by Pablo L. de Aramburu; Tirase a Peter, by Juan Marí Susierra; Los Ángeles 1991, a co-production between Spain and U.S.A by Zacarías and Macgregor, and Einstein-Rosen by Olga Osorio.
Looking at the overall results, the Mostra de Curtmetratges screened 141 short films in its two decades of history. Furthermore, this year’s event has been the first one to present international productions.

The awarded short films in the XX edition Incortum

During the event of the exhibition, hosted by actor Carol Brest, the Incortum award was given to the film Los Ángeles 1991, from Zacarías and Macgregor,  and the audience award to M.A.M.O.N. – Monitor against mexicans over nationwide from Alejandro Damiani. 5 Special mentions were also given out to Los Ángeles 1991 for Best Director and Best Photography; Entre líneas, for Best Screenplay; M.A.M.O.N, for Best Film Editing and Einstein-Rosen for Best Performance.
In addition to the celebration of the 20th edition of the festival, Incortum event organizers, Julio Arche and Juan Marí Susierra, and councilman of culture of Sant Antoni, Fran Tienda, wished to pay tribute to the Ibizan directors who supported and followed the festival from its beginnings: Adrián Cardona, José Luis Mir and Helher Escribano. Therefore, receiving certificates recognizing their hard work as promoters of the short film industry and Ibizan productions.
Councillor Treida also expressed that credit had to given to the event organizers as he quoted, “who have achieved in holding one of the most long-lived exhibitions in the country”. Finally, the Organizing Committee insisted in recognizing and expressing their gratitude towards everyone that each year send in their short film and also the audience that participates in the festival.